I am really right

Okay, so four years ago we established that my friend Samantha's theater job is that of stage manager. At the age of seven she was noticing as much about the technical stuff as she was about the story.

She is now a very pre-tween 11* and, it seems, has not changed in her basic nature. She may sing and dance - she has been cast in her school's upcoming "Fiddler on the Roof" as one of the younger daughters and she also sings very nice solos in church - but she is a stage manager at heart.

How do I know this? Because her cousin Charles (the future producer) was in the 6th - 8th grade play at school which I saw on Friday and Sam saw on Saturday**. Our conversation after church on Sunday went like this:

I think for her next birthday I'm going to buy Sam a bunch of black long-sleeve t-shirts to wear backstage while she calls shows.

And next month Charles and I (and the rest of the crowd) will be seeing Sam in "Fiddler." I'm also willing to bet that The Producer DBA an 11-year-old-boy will have some suggestions for how to improve the gross.

*Some 11-year-olds are still little girls, some of them are seconds away from teendom. Sam is 11 going on 17 and yet still a sweet girl withal.

**And he was adorable. His best moment was as the train conductor in an early scene. He warns the New Yorkers to avoid Lonesome Polecat because of the big feud going on. They are determined to go. And with his father's deadpan delivery Charles says "Well, I hope you've got lots of insurance." "Insurance? Why?" "Ricochets."
Posted by Leta at 17:25 1 comment: 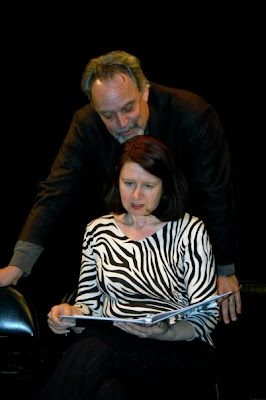 See? It is possible to take a picture of me where I don't have my camera smile.
Posted by Leta at 18:01 2 comments:

I have a pretty decently developed case of CRS* It has gotten to the point that prett' near any time I agree to something I request a follow up e-mail because the chances that I will remember whatever it is all the way to my car are remote. Or even to the other side of the room. Sometimes I forget by the time I hang up the phone.

I was explaining this to someone the other day and said that one day someone will ask me the Important Question and my answer will be, "Oh, darling, you've made me so happy! Yes, of course, I'll marry you. And I'll love you forever. But do me a favor? E-mail me and remind me?"

Not what you'd call shy

An interview with Leta Who Never Runs Out of Things to Say.

Although, tragically, Mike did edit out my chirping "Hi, Honey!" and "Hi, Sweetie!" every time someone came in the room, which could practically have served as a DNA fingerprint that it was really me talking.
Posted by Leta at 16:25 1 comment: