It is a cheery myth among my friends that I know everyone. One time I was presenting an award at Silver Spring Stage's annual awards party and Michael introduced me by saying that I needed no introduction as I know everyone. I got to the mike and something like, "Not quite. There are eight or so of you here that I haven't met. Please see my on your way out."

So tonight after the Nats game*, David and I decided to take the Circulator bus back to Union Station instead of fighting the crowds getting on the green line. David waved his wallet (which contains his SmarTrip card) over the reader on the bus and then I began explaining to the bus driver that I didn't have mine with me.

"Throw her off the bus!" commanded a voice from the front. The driver laughed and waved me back and David and I went and sat with theater-friend Blake (for the commanding voice was his), who was on the bus and who had been at the game. How nice to run into someone we knew!

We were chit-chatting waiting for the bus to get underway and someone near by took a closer look at me. "Leta?" It was Brick, one of my Markland friends, who I haven't seen in probably ten years or more. So that was nice, too!**

David watching me begin to ping-pong a conversation between these people from the disparate parts of my life and asked me if there was anyone on the bus I didn't know.

"Brian." He smiled and shook my hand.

So that's one more down and only 5 billion and some to go before I actually do know everyone.


*Pirates 8, Nats 5 in ten innings. Alas.
**Actual tally for the evening: Lauren from work was at the game but wasn't there with us, I saw her near the consessions; Jacki and Evan were at the game and I got to say "hi" to them during the 6th inning; Blake and Brick (and Brian) were on the bus; Blake introduced me to his friend Ashley and her friend while we were underway; and Rich and Peggy were on the Metro. Brett is going to be surprised to read this, but I didn't see anyone from my high school all evening.
Posted by Leta at 00:20 1 comment:

I do the programs for Silver Spring Stage and I see a lot of theater. Nonetheless, this is the best bio I have ever read.

Samantha (Sprintze) is a 6th grader at [school] and is overjoyed to be part of Fiddler on the Roof Jr. This is her first time ever on stage. She loves acting, singing, swimming, and cooking. She would like to thank her Aunt Leta for getting her into theater, and Mr. Johnson for the training.

"The Episcopal Church - where the Lamb is free-range."

paraphrased from the "A Prairie Home Companion" re-run this weekend.
Posted by Leta at 19:52 3 comments:

My church, like most churches, has baskets in the narthex* to collect nonperishable food for the hungry. As the food went to Silver Spring HELP, the baskets were informally known as the HELP baskets.

I've been contributing off and on all my life, usually whatever random staple I happened to have on hand as I was leaving for church. And after Mom moved from her apartment to Old People's Prison**, I put all the gluten-containing food from her kitchen in the HELP baskets, which was rather a bonus because Mom had pretty wide tastes in food and she didn't buy store brands too often.

I haven't worried too much about what I was putting in the baskets, but ITE*** food and money are walking a little closer together in everyone's minds. I've mentioned before that gluten-free food often costs more and is harder to find than "regular" food. I'm not talking about gluten-free cupcakes, but a more standard cupboard item: breakfast cereal. I gave up eating breakfast cereal when I couldn't find any that either wasn't sweetened with barley malt (which has gluten) or didn't cost a depressing amount of money.

Chex Cereals (owned by General Mills) has recently taken the barley malt out of Rice Chex and replaced it with molasses. They also work to prevent cross-contamination, making these cereals appropriate for Celiacs. This is good news, but cereal is still - comparatively - an expensive food item and food pantries often mention that it is something that they run out of quickly.

So if you read this blog and if you contribute to your local food pantry, I am asking a favor. Please consider buying a few gluten-free items when considering what to donate.

Nature's Path - they're Canadian! They must be nice.

EnviroKidz cereals**** - Thanks to my friend Doug I have a sentimental attachment to the Leapin' Lemurs cereal;

Amy's Organic soups - Several soups are gluten-free (and clearly marked so) and a few are even corn-free. (And if there is an allergy more annoying than gluten, it's corn because HFCS is in every damn thing.)

*lobby
** Come on, really, if the door to your room gets shut and someone else has to open it, or else you can't leave your room, isn't that rather prison-like? If you can't go into the courtyard unless someone holds the door open; if your vitamins are confiscated by the staff; if you get out of bed and go to bed on their schedule - doesn't that justify the phrasing?
***ITE = In This Economy. Thanks, David for the initialism.
****Nature's Path owns Envirokidz
Posted by Leta at 19:46 3 comments:

Treat of the Week 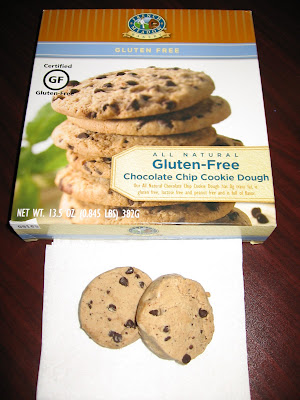 When Sara and I were kids my Mom instituted something that even then I thought was really smart and admire more as an adult: The Treat of the Week.

Mom didn't put restrictions on what the treat could be,* nor did she parcel it out during the week. We could ration it for the week or eat the whole thing on Saturday when we got home. They were our treats. But once it was gone, it was gone. No more treats until the next Saturday.

Sara and I had a nice sense of empowerment about being allowed to chose our own treats and Mom was the spared an entire grocery store of of us whining for more stuff.

For what was probably several months straight, Sara and I each chose a tube of chocolate chip cookie dough. We'd keep it in the freezer and snack on it, usually making it last until the next week.

Instead of baking the cookies, we'd eat the dough raw**, sometimes cutting off lady-like pieces, sometimes just gnawing on it straight from the tube, which prett' near grossed Mom out of existence but as the rule about not micromanaging our Weekly Treats was hers, she'd just arrange to be out of the kitchen whenever we went looking for a snack. She was probably grateful during that period that she worked a sixty-hour week because if I was awake, I was probably looking around for a snack.***

As an adult I was delighted when Ben and Jerry's introduced Chocolate Chip Cookie Dough ice cream and considered it an homage to the Treat of the Week whenever I had some. Then I got that stupid auto-immune disorder and can no longer eat CCCD ice cream.

But thanks to Whole Foods I can at least go back to having random bits of raw cookie dough. Until they realize how much I like it and discontinue carrying it, they have gluten-free cookie dough made by a company called French Meadow that tastes remarkably like anybody else's cookie dough.**** It comes already sliced, which while reducing the level of just-like-when-I-was-a-kid inheirant in consuming raw "food," it does make it more office-friendly.

I buy a couple of boxes, put one in the freezer and one in the fridge, and most days after lunch I wander down to the "coffee mess" and collect one to nibble on back at my desk. Corporate at our company (I work for Corporate) is pretty much a junior UN so no one questions any one's possibly odd-looking food.

It's from Whole Foods and it's gluten-free so it costs enough to enforce a one-per day rationing.

And there are nine per box, so it's more like Treat of the Every Other Week.


* Which is an impressive example of self-control as most of our choices probably made her gag.
** See what I mean?
** This is still true. I am constantly hungry.
**** In the gluten-free world, tasting like the ordinary product is a very good thing.
Posted by Leta at 18:04 No comments:

In the middle of the front row of the dress circle on the rare occasion of the first performance of an original English play sits a young lady of fifteen. She is a very charming girl—gentle, modest, sensitive—carefully educated and delicately nurtured—very easily flurried and perhaps a little too apt to take alarm when no occasion for alarm exists—but, nevertheless, an excellent specimen of a well-bred young English gentlewoman; and it is with reference to its suitability to the eyes and ears of this young lady that the moral fitness of every original English play is gauged on the occasion of its production. It must contain no allusions that cannot be fully and satisfactorily explained to this young lady; it must contain no incident, no dialogue, that can, by any chance, summon a blush to this young lady’s innocent face.

Well, gentlemen, I have no objection to this young lady. I think, on the contrary, that the presence of this young lady has exercised a most wholesome restrictive influence on the character of our few original plays, and I shall be sorry indeed if the day ever comes when her parents and guardians will find it advisable to prohibit her attendance on the occasions I have described. I look upon her presence at my own “first nights” as a direct and most gratifying personal compliment—the more so, as I happen to know that, on no account whatever, would she be permitted to be present at a première of M. Victorien Sardou or M. Alexandre Dumas.

But when a comparison is instituted between our original English drama, such as it is, and the drama of France, such as that is, I think that the restrictive influence exercised—and most properly and wholesomely exercised—by this admirable girl should be fully, freely, and frankly admitted. And it is a never-ending source of wonder to me that, with the whole gamut of human emotion to play upon; with no restraining influence of any kind whatever; and with the dead certainty that no innocent girl of fifteen will ever run a chance of being affected by their improprieties, the dramatists of France can only ring out threadbare variations of that dirty old theme—the cheated husband, the faithless wife, and the triumphant lover.