Much more complex than the one for Dorothy Sayers


David found this handy chart via Boing Boing and I'll tell ya, I've been looking for something just like this for a while now. 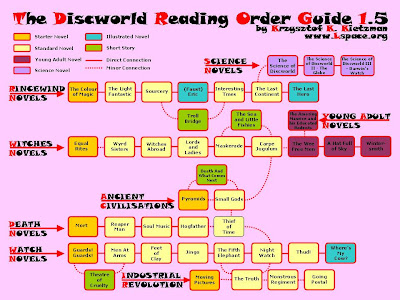 Terry Pratchett fans tend to be a proselytizing lot but every time one of them would recommend his books, I, who like to read books in order,* would ask which one should I start with? Same answer every time: "Oh, it doesn't matter, just pick one up. You can start anywhere." Except that, I can't. Not with books described as comprising a series. Series to me means beginning, middle, and end. So I regarded the answer as non-responsive and didn't read them.

Finally Debbie, who was more dedicated to the Church of Pratchett than some others, told me that if I read them in order of publication, I could watch Pratchett grow as an author. Okay, fine, works for me. So she fed them to me a few at a time and I read them "in order," which makes me happy. And I grew to love them, especially as Pratchett shifted from a Neil Simon-like set up, set up, punchline to storytelling. Very funny, engrossing storytelling.

And so to celebrate this handy new chart, here are a few of my favorite Pratchett quotes:

“It wasn’t that he was unhelpful, but he had the kind of vague, cheerful helpfulness that serious men soon learn to dread.” Mort

“Actors had a habit of filling all the space around them.” Wyrd Sisters

“Magrat plunged on with the brave desperation of someone dancing in the light of their burning bridges.” Witches Abroad

“She felt that the name and the face had established themselves so deeply in her mind now that the rest of her thoughts were forced to orbit them.” Soul Music

"Ankh-Morpork's underworld, which was so big that the overworld floated around on top of it like a very small hen trying to mother a nest of ostrich chicks, already had Big Dave, Fat Dave, Mad Dave, Wee Davey, and Lanky Dai. Everyone had to find their niche." Hogfather

A catastrophe curve, is what opera runs along. Opera happens because a large number of things amazingly fail to go wrong.” Maskerade

*Using like to indicate the same level of interest and commitment as in the sentence "I like to breathe." Or "I like to have a nice, hot cup of tea." Just a bit of OCD there, I agree.
Posted by Leta at 12:11

I read "Colour of Magic" probably 25 years ago, and JUST finished "Going Postal" now. I've been reluctant to embark on the Discworld series, as I have three shelves of to-be-reads otherwise, but now it looks like I have to!

Speaking of, any time you'd like the next set, you're more than welcome to it! Dinner some time? Lunch? (I miss you!)

Heehee! I read one or two, and then had a similar impulse to read them in a logical order. I gave up, but maybe armed with this chart, I'll try again.