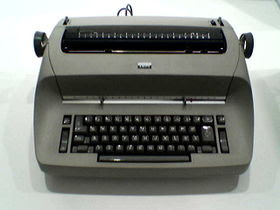 We have an old IBM Correcting Selectric II here in the office and I would fling my body in front it to save it were anyone to try to remove it. Selectrics don't have the groovy bells and whistles that, say, iPhones do, but you can open a Selectric up and make a few changes and it will still work. In fact, you can back over it with your car and it will still work. Largely, because it's heavier and more solid than any car I ever drove, possibly excepting the '68 Cougar I had in college. But the Selectric probably gets better gas mileage and won't rust out the way the Cougar did.

I was planning on writing a little love note/blog post to this Selectric today anyway because, well...because I love it, that's all. But things were brought to a head when one of our newer accountants, after being informed that handwriting envelopes containing large checks was not the done thing, asked me how one would "put a typed address on an envelope." And he wasn't kidding.

He had never used an actual typewriter in his life. Not before today anyway. I taught him how. Oh dear.

I learned on my Mom's old Royal manual and I earned some pocket money typing her papers when she was taking some classes when I was a teenager.* In high school, I took typing on a Selectric. And thus a life-long love affair was born.

The Selectric (jeepers, I wish these posts came with a soundtrack because this is just crying out for something by Paul Williams to underscore it) is easy to use and even though it is - literally - older than most of our new accountants (sigh) it still works beautifully. And it sounds like a typewriter. Remember how phones used to sound like phones and now they all sound sort of like the situation normal indicators on life support equipment? Well, newer typewriters don't really sound like typewriters. They just don't.

And it never gets paper jams, unlike a certain copier I could mention here.

It just types. First time, every time. The ball doesn't jam up the way the keys did on the Royal, and the end of line indicator is a cheery bell sound.

And it corrects. Easily. Sure, changing the correction ribbon is something that only the high priestesses of the Selectric (such as, ahem, mine own self) can accomplish but changing the regular ribbon doesn't get toner all over your hands, like with a certain copier that I have been given permission to destroy with the fire ax once it's lease is up.

And...and....and it's a nice color. Well, not bad color. A perfectly reasonable color, unlike that other electric typewriter in the office which is some kind of depressing county office worker teal. The Selectric is a nice, dark beige.


*I typed them pretty poorly because I was too impatient to wait the eons that it took Mom's old McDonald-milkshake-thick White Out to dry, among other things.
Posted by Leta at 17:10

My favorite thing about the Selectric is its hum. So soothing.

I still have a manual typewriter around somewhere. You know the one where, if you know where the keys are you can type in the dark. During a power outage.

Given your habit (well, one time habit anyway) for naming things (all of your cars have names, don't they?), I have to ask if the Selectric doesn't have a name (Sally maybe?).

My fondest Selectric memory is of the opening credits for the TV show UFO. I no longer recall what it typed but the sounds of it combined with the theme music is clear in my head.

When I was in college, the big deal about the Selectric was that you could change the fonts by swapping out the type ball. The Slavic Department had trouble keeping the Cyrillic ones, because all the Russian students who wanted to type a paper in the correct alphabet kept wearing 'em down. Oh, and then there was the opening exercise - typing out the keys in each row so you know what Cyrillic letter you'd get when you hit a given key.

I have one on my desk, I even have a symbol ball for it. Of course you talk of the Selectric II but your picture is of the curvey original. --Simon